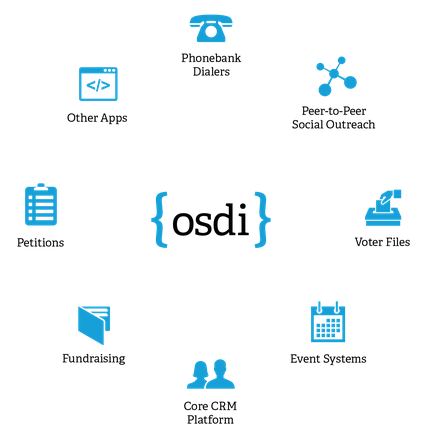 There is an exciting new initiative happening in the big data world that is aiming to help nonprofits have easier access to their data across various systems. thedatabank’s Chief Technology Officer and Co-founder, Mark Paquette, is here to break down what this new initiative is and what it means for thedatabank and nonprofit organizations.

What is this new initiative?

It’s called “Open Supporter Data Interface,” or ODSI for short, and it’s a specification that will allow thedatabank to interact much more smoothly with other services and applications. thedatabank is participating in writing the OSDI spec, along with many of our friends on the progressive side of data management. These include other database vendors such as Catalist and NGP VAN, but also users such as the Sierra Club and the United Food & Commercial Workers (UFCW). The list of participants is available at OSDI’s site: http://opensupporter.org/

What makes this such an exciting project?

I’ve been building organizational databases for oh, let’s say, a long time. A constant challenge during those years has been moving data around in a timely fashion: between a CRM and a phonebank, a voter file and an event system –any time you’re updating records in one place based on data from somewhere else. Each data source usually has its own structure that’s built to address its own core functions. But the data structures built for different systems are usually incompatible with each other.

OSDI standardizes field names and relationships between people, addresses, donations, events, petitions, and more, across systems. A vendor like thedatabank can expose an OSDI application programming interface (API), and now data can move freely among a variety of services, applications, and devices. OSDI’s vocabulary encompasses many of our clients’ needs (fundraising, meetings, petitions, etc), so it provides a rich base of compatibility. It also opens up the door to specialized third-party apps that can talk to a variety of systems, such as a mobile canvassing app that is not tied to one database vendor or CRM.

How did thedatabank become involved in the OSDI project?

I met Josh Cohen, OSDI’s prime mover, at the NTEN Conference in 2013. I was planning the next version of thedatabank’s API and Josh was looking for people interested in writing this specification for interoperable, vendor neutral APIs to be used by progressive, nonprofit, and political groups. I jumped at the chance to participate. We have an active GitHub project documenting the specs, and weekly phone meetings to resolve issues and coordinate the work.

In the early days of telephones, they were leased in pairs to a subscriber, who had to arrange for a telegraph contractor to construct a line between them, for example between a home and a shop. Users who wanted the ability to speak to several different locations would need to obtain and set up three or four pairs of telephones. Then telephone exchanges came along, and different phone systems could suddenly talk to each other, eliminating a lot of work and expense.

OSDI can do the same for data exchange. Instead of writing single-purpose import/export/synchronization routines between pairs of vendors and applications, we can just plug them in to work together. If all of us can agree on a way to connect, connections become effortless. That’s the vision.

Note: OSDI is only a pre-release specification at this point, and is not fully implemented by any vendors. thedatabank plans to release an OSDI-compliant API in the coming year.

Questions or thoughts about OSDI? Leave them in the comments.